Pyrimidine, also known as 1,3-diazabenzene, is a heterocyclic compound with the chemical formula C4H4N2. Pyrimidine is a diazine formed by replacing two carbons in the intermolecular position of benzene with two nitrogen atoms. Like pyridine, pyrimidine retains its aromaticity. 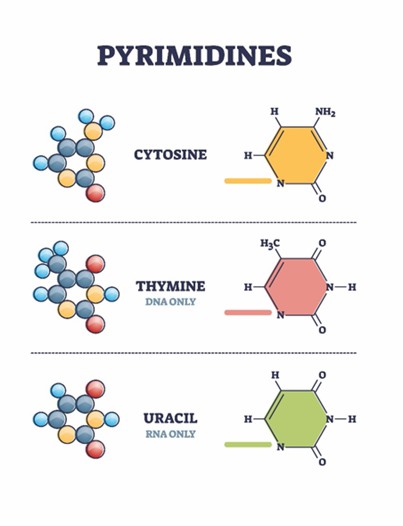 Of the five bases that form DNA and RNA, three are derivatives of pyrimidines: cytosine, thymine, and uracil of which thymine can only occur in deoxyribonucleic acid and uracil can only occur in ribonucleic acid, while cytosine can be both. In base complementary pairing, thymine (in DNA) or uracil (in RNA) is bound to adenine with 2 hydrogen bonds and cytosine is bound to guanine with 3 hydrogen bonds.

As in the case of parent heterocyclic systems, the synthesis of pyrimidines is usually carried out by removing the functional groups from the derivatives. A large number of primary syntheses involving formamide have been reported. For example, barbituric acid (2,4,6-trihydroxypyrimidine) can be produced by condensation of urea with diethyl malonate in the presence of sodium alcohol. Barbituric acid is heated with phosphoryl chloride to give 2,4,6-trichloropyrimidine, which in turn reacts with sodium methanol to give trimethoxypyrimidine. Chloropyrimidines react with ammonia or primary or secondary amines to produce the corresponding aminopyrimidines. Alternatively, 2,4-dichloropyrimidine is produced by a reduction reaction in the presence of palladium, magnesium oxide and activated carbon.

For example, 5-fluorouracil is a widely used anti-metabolic and anti-tumor drug, which has inhibitory effect on many kinds of tumors and is used for the treatment of intestinal cancer, gastric cancer, breast cancer and other cancers with good clinical effect. Its monomer or 5-fluorouracil derivatives linked with polyester, furan and nitrogen oxide radicals have anti-tumor effects. In order to reduce its toxic side effects, a lot of modification work has been carried out on 5-fluorouracil with certain effect. Such as the introduction of short peptides, glucose, and nitrogen oxide radicals.

Some 1-[(2-hydroxyethoxy)methyl]-6-(phenylthio)thymidine (HEPT) analogs have strong HIV viral suppressive effects with low toxic side effects, and the analogs have a wide range of anti-drug resistance effects. Despite the low toxicity and high efficiency of HEPT as a non-nucleoside drug, the clinical use of long-term high doses can still produce toxic side effects such as eczema and elevated transaminases. Therefore, in order to increase the efficacy, reduce side effects and avoid HIV resistance, HEPT is often used in combination with clinically used anti-HIV drugs such as AZT, DDI, DDC and carbocyclic guanosine, respectively.