Pyridine is a class of hetero-aromatic organic compound with empirical formula C4H4N2.  It is structurally similar with benzene, with CH group replaced by a nitrogen atom. It is a highly flammable, weakly alkaline, water-miscible liquid with a distinctive, unpleasant fish-like smell. Pyridines appear in many naturally occurring chiral ligands, pharmaceutical molecules, bioactive compounds and in polysubstituted forms. The pyridine moiety is present in countless molecules with applications as varied as molecular recognition, catalysis, drug design and natural product synthesis. Examples of pyridines include the well-known alkaloids lycodine, the A3 adenosine receptor antagonist, and a N,N-dimethylaminopyridine (DMAP) analogue commonly applied in organic synthesis. Pyridine derivatives have also been implicated as small molecule α-helical in the inhibition of protein-protein interactions, and functionally selective GABAA ligands. Halogenated pyridines in particular are attractive building blocks for various cross-coupling methodologies, such as Suzuki-Miyaura cross-coupling reactions.

Pyridine moiety constitutes a part of the neonicotinoids structure which are most commonly used in the world for insect control because of their advantages in protecting a great variety of crops, as well as high efficacy without cross-resistance to other insecticides, low mammalian toxicity and broad insecticidal spectra (Fig.2). In 2017, Abdel-Raheem lab have successfully synthesized and characterized a new series of water-soluble compounds, piperidinium and morpholinium 3-cyanopyridinethiolates. These compounds were screened for their insecticidal activities against cowpea aphids, A. craccivora. Some of compounds proved to be promising insecticidal agents since they showed higher activities than those of acetamiprid insecticide itself. 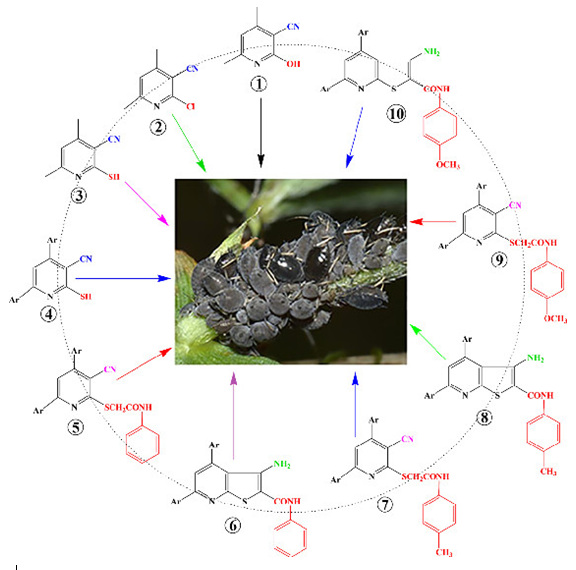 Recently, a series of new pyridine derivatives neonicotinoid analogues have been synthesized in Abdel-Raheem lab in 2019. The presence of different functional groups in the structure of the compounds gave a variety of insecticidal activities as potential insecticides. This study illustrated that the synthesized pyridine derivatives have valuable agricultural bioactivities.

Pyridine derivatives are very important chemicals with tremendous biological application. In medicinal applications these compounds share an important part. Pyridine derivatives have moderate to excellent activities against number of biological targets. With changing substituents on the pyridine nucleus the biological targets vary from microbial diseased to viral problems and variety of cancerous cells.The thienopyridine and other pyridine derivatives compounds(Fig.3) possess good antibacterial activity has been showed against gram positive bacteria S. aureus and are also efficient against gram negative coli, P. aeruginesa and P. vulgaris. 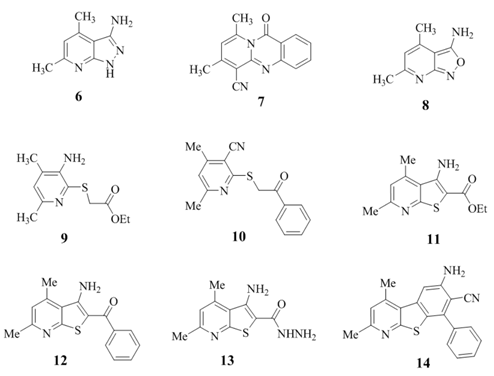 Commercially available cheap pyridine-based ligands are able to promote good to excellent yields for many reactions. Pyridine is able to coordinate almost all transition metals to afford a great number of complexes in different oxidation states due to its rich orbitals that further contribute to the formation of the bond to metal centers. Besides lone pair orbitals from nitrogen , π-electron from heterocycle is also capable of bonding to metal ions. Moreover delocalized π* anti-bonding orbitals can act as acceptor of metal electron density (Fig.4).