Most oxetane and thietane are very water-soluble, because conjugated structure is absence in the polar four-membered rings and the oxygen or sulfur atom can form hydrogen bond with water molecule which coordinatively promote the solubility. Without the limitation of the conjugated framework, oxetane and thietane possess a low boiling point and melting point thus they are commonly presented as colorless liquid. After a long period of research, many reports have demonstrated that oxetane and thietane are the key active functional groups of natural products, advancing the fabrication of various modern medicine and research of pharmacological molecules.

Oxetane and thietane compounds are widespread in natural drug molecules and biological metabolites (Fig 2). Their derivatives are usually utilized to prepare medicinal precursors, which possess remarkable pharmacological and physiological activities, such as antibacterial, anticonvulsant, anti-tumor and anti-inflammatory behavior, etc. The bioactivity and solubility of the oxetane derivatives can be adjusted by modifying different functional groups to achieve optimal effect. 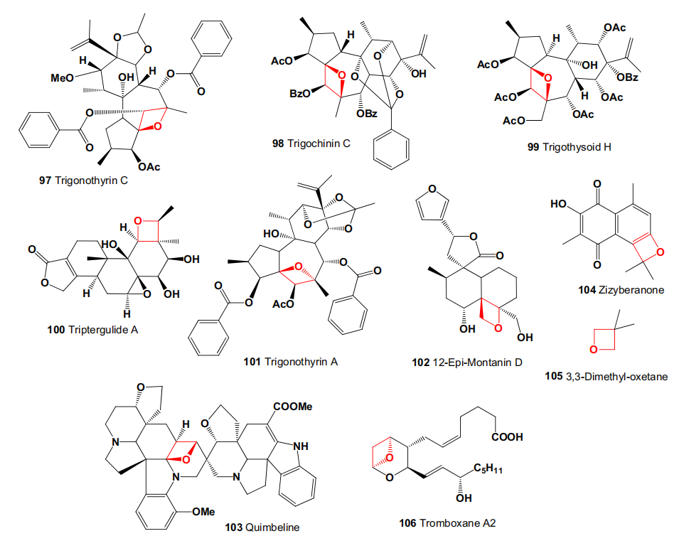 Owing to the ring tension and polar property of oxygen atom, all the oxetane rings can participate in retro-aldol condensation reactions, providing more complex products in a one-step method. The related example is shown in Fig 3.

As the fundamental genetic material of an organism, amino acid plays a particularly important role in sustaining the growth of organisms. Oxetane can react with glutathione, offering potential application in testing. As depicted in Fig 4, A variety of oxetane analogs have been utilized as building blocks of probes for medicinal chemistry.