Morpholine, also called 1,4-oxyazocyclohexane, is a colorless, oily liquid with ammonia flavor at room temperature, which can be used as analytical reagent and resin, wax and shellac solvents. Morpholine has characteristics of ether and amine compounds because the heterocyclic ring contains nitrogen and oxygen. Compared to morpholine, the oxygen in the N-heterocyclic ring is replaced by sulfur in the structure of thiomorphline. Thiomorphline is often used as an important structural fragment in the design of new drugs due to its good biological activity. 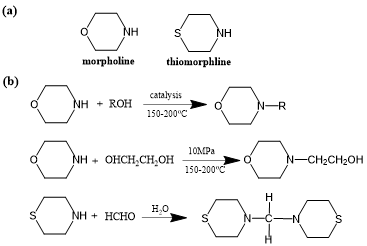 Medicine: In terms of medicine, morpholine derivatives can be used as analgesics, local anesthetics, antispasmodic and other drugs. Fominoben is a new antitussive agent. Clinically, Morphocycline is used for the treatment of various serious infections caused by tetracycline-sensitive bacteria, and also for the diagnosis of lung cancer. In addition, bimolane is involved with the treatment of psoriasis.

Anti-scaling Agent: Morpholine is widely used as corrosion inhibitor and scale inhibitor for steam boiler, and N-tert-butyl morpholine and morpholine sulfonate has a good corrosion resistance to oil storage tank and pipeline equipment.

Anti-scorching Agent: The product produced by the condensation of morpholine subsulfonyl chloride and phthalimide is a kind of effective anticoke agent, which is a new product developed abroad in recent years.

Metal Corrosion Inhibitor: Some morpholine derivatives are regard as anti-rust agents for metal products to prevent metal from being corroded by the atmosphere and have been widely used in the fields of mechanical vehicles, instruments and medical instruments, etc. Morpholine has the advantage of low toxicity as a metal corrosion inhibitor and has a good development prospect.