Imidazopyridines, the five-member imidazole moiety fused with the six-member pyridine ring, are important biologically active nitrogen containing aromatic heterocyclic compounds. Among the various imidazopyridine derivatives, the imidazo[1,2-a]pyridine moiety is the most fundamental in the area of natural products and pharmaceuticals. This moiety is also useful in various disciplines like organometallics and material science. Quite few natural products including the skeleton have been reported while the majority of such compounds can be synthesized employing different strategies such as condensation, multicomponent reactions, oxidative coupling, tandem reactions, aminooxygenation, and hydroamination reaction.

Great majority of imdazopyridines are colorless crystals and generally dissoluble in many organic solvents and indissoluble in water at normal temperature and pressure. As an electron-rich aromatic heterocyclic compounds, imdazopyridine is subject to oxidative processes. In addition, the C-3 position is most electron-rich, which makes it capable of being attacked by an electrophilic agent or a radical. Through these electrophilic agents or free radicals, substitutions in C-3 position of imdazopyridines have attracted great interest in organic synthesis and pharmaceutical screening.

Imidazopyridine derivatives show an extended range of biological activities such as antifungal, anti-inflammatory, antitumor, antiviral, antibacterial, antiprotozoal, antipyretic, analgesic, anti-apoptotic, hypnoselective, and anxioselective activities. They also act as β-amyloid formation inhibitors, GABA and benzodiazepine receptor agonists, and cardiotonic agents. Out of 1470 patents containing this scaffold, 56% have been published since 2000. There are several drugs such as zolpidem (1, used in the treatment of insomnia), alpidem (2, as an anxiolytic agent), olprinone (3, for the treatment of acute heart failure), zolimidine (4, used for the treatment of peptic ulcer), necopidem and saripidem (5 and 6, both work as an anxiolytic agent) available in the market which contain the imidazo[1,2-a]pyridine moiety (Fig. 2). The optically active GSK812397 is a drug for the treatment of HIV infection. The antibiotic drug Rifaximin also contains this fused heterocyclic moiety. In addition, some abnormal N-heterocyclic carbenes are also prepared based on imidazo[1,2-a]pyridine. 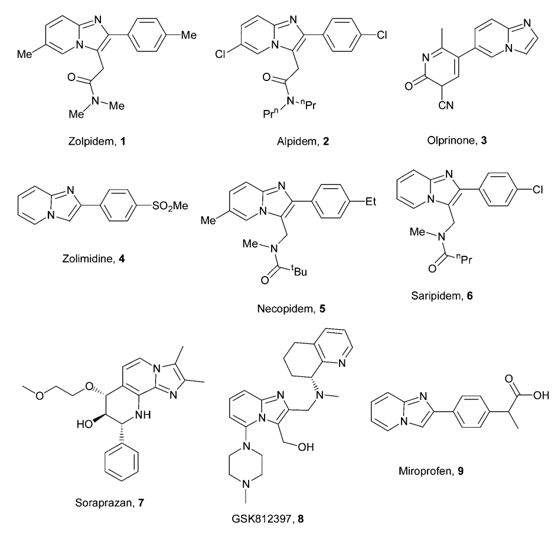 Imidazopyridines serve as a new type of abnormal N-heterocyclic carbenes, which become of considerable importance in organometallic chemistry. Such imidazopyridine-based organometallic compounds, whose central metal can be sliver, iron, iridium and other transitional metals, are extensively considered as homogeneous catalysts.

Derivatives of imidazopyridine can be used as electron-transporting host materials for hybrid fluorescence or phosphorescence white organic light-emitting devices. 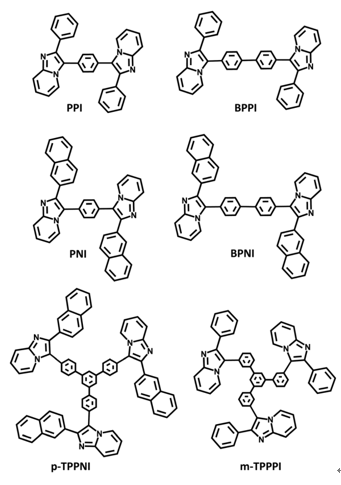