The search for biologically active compounds is the driving force in pharmaceutical synthesis. Since the majority of new molecules entering clinical studies contains at least one heterocyclic moiety predominantly N-heterocyclic ones the modification of these ring systems plays an important role during drug development. Thus, there is always a specific need for novel heterocyclic ring systems, both for finding new hit structures and in optimisation of lead compounds. Although theoretically unlimited, in practical terms and due to technical and economical reasons, only a very limited number of heterocycles is available for medicinal chemistry today. Heterocyclic compounds also have a practical use as components in dyes, antioxidants, copolymers, bases, and ligands. In a word, some necessary groups can be introduced into building blocks and change the properties of subsequent compounds. 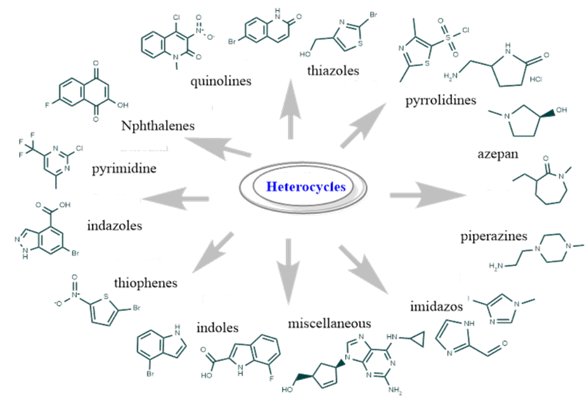 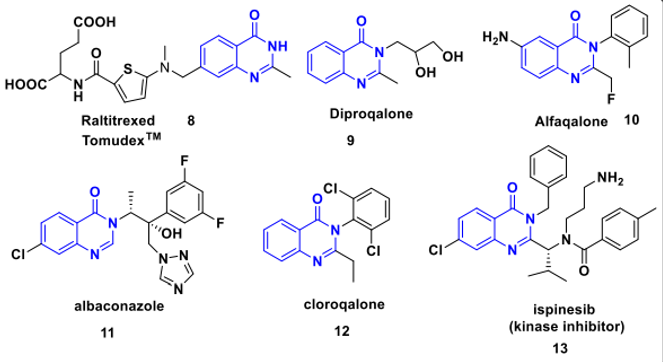 Agricultural Chemistry: As in pharmaceutical research, the industry synthesizes many thousands of compounds for testing in the previously mentioned areas; many are found to have some level of activity, but often not with enough to justify commercial development. The cost of production also may prevent the introduction of new agents to the market, as will mammalian toxicity considerations. Nevertheless, the field is large and of great importance in the vast area of agriculture. The real value of synthetic agrochemicals only became apparent by the discovery in the 1940s of the powerful insecticides Dichlorodiphenyltrichloroethane (DDT], and esters of organophosphorus acids such as parathion ((EtO)2P(S)OC6H4-NO2-p), among other compounds. Research on pesticides and PGRs became a major activity of many industrial firms, and a great variety of structures were found to have commercial value, heterocycles being prominent among them. This will summarize some of the heterocyclic compounds that were commercialized during the early years of pesticide and PGR research. Viewing these compounds provides an excellent introduction to the wide range of heterocyclic ring systems found in the more active agents(Fig.3). 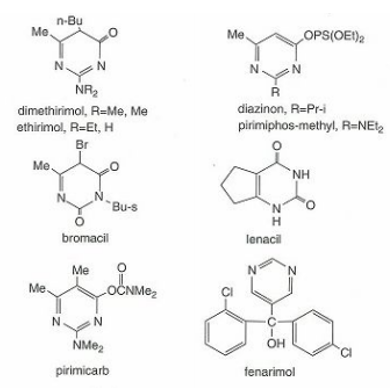 Materials: Organic semiconductors (OSCs) are a class of carbon-based materials that exhibit optical and electronic properties. They have been a focus of inquiry in the development of potential low-cost, large-area, flexible, and lightweight optoelectronic devices, such as light-emitting diodes, solar cells, field-effect transistors, organic lasers, and electrochromics. Based on the commercial availability and low cost of thiophene, a number of related building blocks and polymers can be synthesized. Oxidation of thiophenes under certain conditions, such as with ferric chloride, gives polythiophenes(PTs) with high yield. An alternative way is to introduce functional groups to the a-positions of the thiophene rings. As an electronic rich heterocycle, these positions are readily activated by direct lithiation or bromination. PTs are among the most important and commercially successful semiconducting polymers. Extensive effort has been made to improve the performance of the devices based on such materials in a variety of chemical and processing aspects. 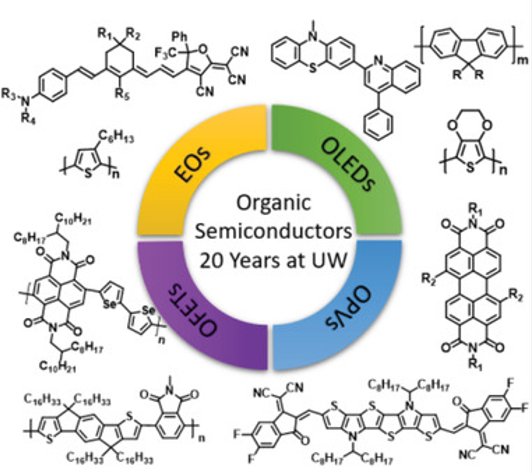