Furans (also known as oxole) constitute a valuable type of heterocyclic compound with a five-membered structure, which is a conjugated oxygen-containing ring consisting four carbon atoms and one oxygen atom. They are widely abundant in natural substances especially in the pine tar, numerous biologically active compounds have been demonstrated that the furan moiety is the major structural framework. the oxygen in the aromatic ring possesses the electron-donating effect, thus the electrophilic substitution reaction activity of furan is stronger than that of benzene, electron transfer of the furan compounds is depicted in Fig 1.

Unmodified furans are slightly water-soluble, because the polar five-membered rings bring stable conjugated structure and limit the dissolution, but the oxygen atom can form hydrogen bond with water molecule which slightly promote the solubility. It is noteworthy that tetrahydrofuran is totally water-soluble owing to the absence of the conjugated structure. Furans possess relative low boiling point and melting point thus they are commonly presented as colorless liquid. We should notice that furans are flammable and slightly toxic, thus every care should be taken during storage and use. It is well known that furan has been utilized in organic solvents, chemical and biologic research, synthetic raw material and pharmacological studies.

Owing to the polar property of oxygen atom, all the furan rings possess the property of aromatic ring, which can participate in halogenation, nitration, sulfonation and other electrophilic substitution reactions. It is easy to open the furan ring to form polymer with strong acid, so it is necessary to utilize special reagent for nitrate or sulfonate reaction. Besides, furan can also take part in the catalytic hydrogenation to produce tetrahydrofuran, which is an important common polar solvent.

Owing to the oxidizability of the oxygen-containing conjugated ring, furan compounds can be used to transport positive charges by a radical cation species, endowing the role as semiconductors. A series of furan rings are reported to be linked and constitute coplanar organic semiconductors (Fig 2). 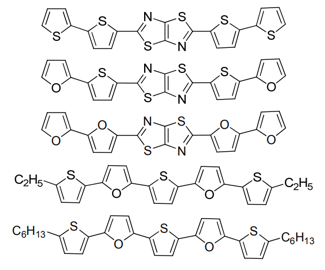 Furan compounds are widespread in natural drug molecules. Their derivatives are usually used to prepare medicinal precursors, which possess remarkable pharmacological and physiological activities, such as antibacterial, anticonvulsant, anti-tumor and anti-inflammatory behavior, etc. For example, furan can cause cytosine DNA hypermethylation of tumor, promote modification of histone and decreased expression of oncogenes (Fig 3). 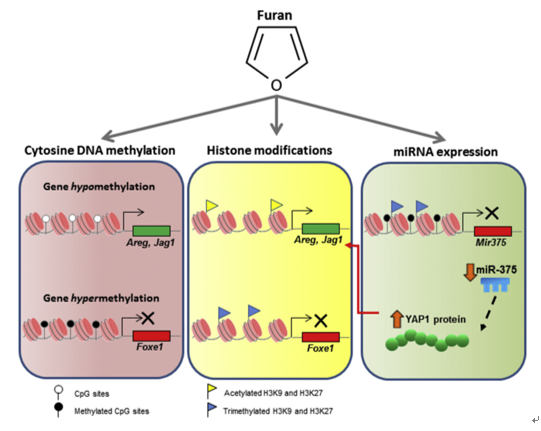