Azaindoles, one of isomer of indole, have similar skeleton containing pyridine and pyrrole structure. The only difference between azaindoles and indole lies on the substitution of benzene ring by pyridine. Based on the relative location of N atom in pyridine structure, azaindole involves four isomers. They are 4-azaindole, 5-azaindole, 6-azaindole and 7-azaindole. Due to the same suitable skeleton, all these isomers show all kinds of biological activities. Azaindoles show weak alkalinity which can be attributed to lone pair electrons attatched on the N atom of the pyridine ring. What’ more, owing to the presence NH group of the pyrrole moiety, azaindoles can be regarded as the hydrogen bond acceptor and donor, which makes them capable of making bidentate hydrogen bonds with kinase thus inhibiting kinase. Given the N atom and NH group, a variety of coordination modes can be adopted when in terms of the coordination chemistry of azaindoles and transition metal complexes. In particular, monodentate N-donou code is the most common. 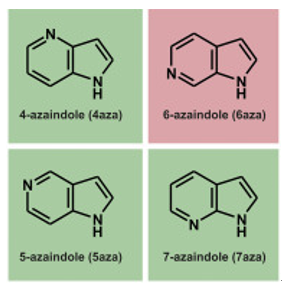 There are many methods for for preparing azaindoles literature reported. Among them, the following two methods are the most common:

Due to the activity of inhibiting protease, azaindoles hava found numerous application in pharmacy. Researcher in medicinal chemistry make great effort in remodeling and decorating compounds containg 7-azaindoles structure in order to improve special physicochemical properties and pharmacological activities of these compounds and expand the scope of utilization. Through tuning the structure of 7-azaindoles, different action target can be tuned thus making them possess versatile performance towards various disease. 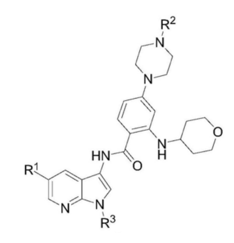 Derivative azaindoles with substituents at position 2 and 5 show excellent activity against yeast, especially cryptococcus neoformans. It is worthy noting that some derivative azaindoles with well-defined structure are double-targeted inhibition agent which have outstanding performance towards suppression of bacterial DNA helix enzyme and topoisomerase IV. Theirs activity is superior to neomycin.

Having special structure including pyridine and pyrrole, azaindoles can be regarded as one of the most important heterocycle ligand and can coordinate with many transition metal complex to catalyze a variety of organic reaction such cross-coupling and C-H bond activation. In addition, different substitute effect including space and electronic effects can be investigated via C-3 functionalization or the substitution of hydrogen atom attatched to N atom in pyrrole structure.