As one of the isomer of indazole, azaindazole has similar skeleton with indazole except the presence of pyridine instead of benzene ring. Based on the relative location of N atom in pyridine structure, azaindazole can be divided into four isomers which are 4-azaindole, 5-azaindole, 6-azaindole and 7-azaindole, respectively. Due to the presence of N atom and NH group, azaindazole show weak alkalinity which can be used as weak base in organic synthesis. In addition, azaindazole also can be regarded as hydrogen bonds acceptor and donor for the same reason. 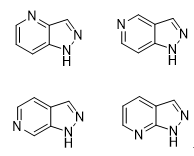 All azaindazole exhibit the dual chemical reactivity of pyridine and pyrazole due to the co-existence of both structure. The presence of aromatic ring structure make them capable of occur avariety of reactions involved substitution reaction, acetylation and halogenation. It is worthy noting that azaindazole has a very high boiling point and melting point, which makes it solid state at room temperature.

The main approach for preparing azaindazole most literature reported: 3-fluoro-2-pyridinecarboxaldehyde and hydrazine undergo addition reaction at high temperature. After that, the reaction mixture was diluted with water and extracted with EtOAc. The organic phases were combined, washed with brine, and dried to afford corresponding product.

Azaindazole derivatives have been widely used in the treatment of influenza as potential anti-viral agent due to theirs unique properties caused by special structure. Compared with traditional agents such as the neuraminidase inhibitors including oseltamivir and zanamivir, azaindazole derivatives agents have a novel mechanisms of action towards influenza, which makes them capable of reducing the resistance of the virus. In addition, only moderate impact can be obtained by use neuraminidase inhibitors while azaindazole derivatives can achieve excellent effect and the drug effect can be maintained for longer time.

Owing to the activity of inhibiting kinase, azaindazole derivatives have found various application in medical therapy. Pharmaceutical chemists have made enormous efforts in designing drug molecules based on azaindazole derivatives. In order to design well-defined molecule with multifunctional effect, structure-function relationship is attracting extensive interest. It is worthy noting that excellent performance towards anti-cancer, anti-bacteria, anti-diabetes and anti-spirit disease can be achieved through tuning the substitution of azaindazole derivatives.

Azaindazole is an important class of intermediate in organic synthesis. Owing the presence of pyridine and pyrazole structure, substation of aromatic structure or hydrogen atom attatched on the N atom in pyrazole structure can produce a variety of derivatives, thus making them a potential candidate for constructing organic skeleton.