The structure of arene is an aromatic sextet composed of σ-bonds and delocalized π-electrons (Fig.1). The use of a circle enclosed within a hexagon to represent the aromatic sextet of benzene was first invented by the British chemists in 1925. The ring symbolizes the view that six electrons in the benzene molecule produce a stable association which is responsible for the aromatic character of the substance. It should be noted that there continues to be debate over the exact meaning of the symbol. While several of the above textbooks have used it to denote cyclic π-electron delocalization irrespective of electron counts, some advanced monographs restrict its use only to those monocyclic π-systems which obey the Hückel 4n+2 rule for aromaticity, thus allowing for 2, 6, 10, etc. π-electron systems. The term "aromatic" initially refers to the unique sweet or pleasant odour of the arenes instead of physical aromaticity features.

The carbocyclic aromatic compounds constitute one of the most populated classes of organic compounds, crucial for pharmaceutical industry, plant protection, perfumery, liquid crystal, OLED, modern functional materials and polymer production, as well as many other chemical applications.

Positron emission tomography (PET) and single photon emission computed tomography (SPECT) are subfields of nuclear imaging that emerged from the combined efforts of national laboratories, academia, and industries. These include direct 18F-fluorination strategies as well as protocols to install onto these aromatic ring systems a range of 18F-labeled motifs that have proved significant in medicinal chemistry or radiotracer design. Arenes and heteroarenes remain privileged structural motifs of great importance for both medicinal chemistry and for radiochemists because they are metabolically robust and do not easily undergo defluorination processes possible with alkyl fluoride. Until recently, heating and microwave irradiation were the main modes of activation used to induce 18F-aryl bond formation from a range of precursors armed with leaving groups of variable efficacy.

Supramolecular chemistry is a highly complex ordered entity formed by the interaction between two or more chemicals. Pillar[n]arenes have highly symmetrical rigid cylindrical structures, electron-rich cavities and multiple modified sites. In the past decade, there have been many reports about pillar[n]arenes, which have become the core of supramolecular chemistry. Early scholars mainly studied host–guest chemistry, such as host–guest interaction of guest molecule viologen, pyridine salts, quaternary ammonium salts and bipyridine salts, dipyridine salts, imidazole salts and ionic liquids. In the aspect of assembly, mechanical interlock structures such as rotaxane, pseudorotaxanes, catenanes and daisy chains were mainly studied. In recent years, in order to enrich the tool box of artifcial macrocyclic compounds as well as seeking out new opportunities in supramolecular macrocyclic chemistry, numerous pillarene-related macrocyclic arenes have been constructed (Fig.2).

Fig.2 The model structure of pillararene

Metal atoms, metal surfaces, and metal compounds interact with aromatic hydrocarbons and often form stable complexes through overlap of the ring π and π* orbitals with appropriate orbitals of the metal atom (Fig.3). Hein and his co-workers isolated the first molecular arene-metal complexes in 1919, but definitive compositional and structural characterization of these complexes was not achieved until the mid-fifties. In a general context, the structural features of molecular arene-metal complexes are well-defined. For example, the metal-carbon and carbon-carbon bond distances can be predicted to within certainly 0.05 and 0.02 Å, respectively, for any new defined transition-metal complex with a benzene or simple alkyl-substituted benzene ligand. 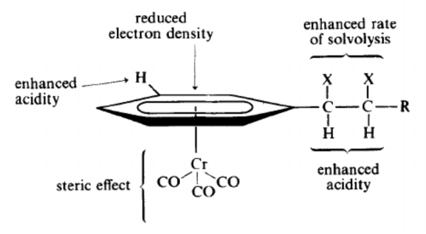