Allenes is a class of unsaturated compounds with cumulated double bonds. Featured with the same carbon atom possessing two orthogonal π orbitals, the electron cloud density of allenes can be tuned by substituent effect. Various reaction can be achieved by tuning the four substituents attached to carbon atoms, which makes them possible to act as organic construction unit. In addition, inherent axial chirality of allenes plays a significant role in synthesis of respective products with chirality in asymmetric catalysis. 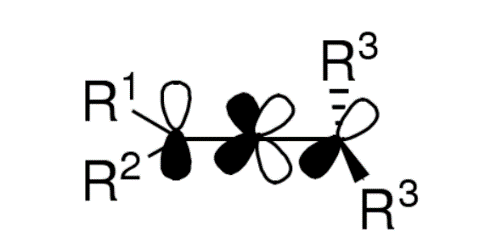 The main approach of preparing allenes reported in literature includes:

1. Halogenated hydrocarbon undergoes elimination of halogen hydride to give allenes. What’s more, Dehalogenation of dihalogenated alkenes is also a useful method to yield allenes. However, the utilization of strong bases hamper their practical application due to the formation of alkyne, the isomerization byproduct of allenes during the reaction.

2. Multisubstituted allenes can be obtained by cross-coupling of terminal alkyne and aldehyde in the presence of amine and transition metals through one-pot synthesis.

3. It is worthy noting that 1,2-allenes derivatives with axial chirality can be produced catalyzed by well-defined transition metal catalyst.

They can participate in a variety of chemical reaction and used as construction unit of common compounds with widespread application in laboratory investigation and industrial production. Given below is common reactions allenes participate in.

In view of the special pharmacological activity of allenes, great efforts have been made to indroduce enyl groups to modify drugs. For example, the introduction of enyl groups into prostaglandins and prostaglandins not only increase the pharmacological activity of the drug, but also improve the stability of metabolism and availability of organisms. In addition, Diene amino acid drugs play a significant role in regulatory metabolic pathway.