Alkynes are aliphatic hydrocarbons containing at least one carbon-carbon triple bond with CnH2n-2 stoichiometry. The carbon-carbon triple bond forms two sets of overlapping p orbitals, which results in sp hybridization on the alkyne carbons (Fig.1). Alkynes have linear geometry, and the bond angle is 180 degrees. The highly reactive triple bonds can be applied in numerous reactions like Sonogashira cross-coupling reaction, electrophilic additions of hydrogen, halogens, hydrogen halides, or water; metathesis reactions; hydroboration; oxidative cleavage; C–C coupling; and cycloadditions. Terminal alkynes may be transformed into metal acetylides and can then be submitted to nucleophilic substitution with alkyl halides to form new C–C bonds, or submitted to nucleophilic addition such as the Favorskii reaction. Alkyne building blocks with a second functionality are particularly useful in the Huisgen 1,3-dipolar cycloaddition of alkynes to organic azides. The second functional group allows the attachment of a molecule of interest that subsequently can be joined conveniently with the target azide.

Fig.1 Electronic structures of acetylene and examples of alkynes

The first naturally occurring acetylenic compound, dehydromatricaria ester, was isolated from an Artemisia species in 1826. Diynes and triynes, species with the linkage RC≡C-C≡CR' and RC≡C-C≡C-C≡CR' respectively, occur in certain plants. These compounds are highly bioactive as nemacides such as the illustrative nature molecule, 1-Phenylhepta-1,3,5-triyne. Alkynes occur in some pharmaceuticals, including the contraceptive norethynodrel. A carbon–carbon triple bond is also present in marketed drugs such as the antiretroviral Efavirenz and the antifungal Terbinafine. These compounds are some of the most aggressive antitumor drugs known so that the ene-diyne subunit is sometimes referred to as a "bullet", which may contribute to the highly reactive radical intermediates derived from rearrangement via the Bergman cyclization that are able to attack DNA within the tumor.

The main target in medicinal chemistry is to synthesize compounds or libraries of compounds during the process of drug discovery or lead optimization, and for this reason, this ﬁeld is particularly attracted to synthetic methodologies that allow rapid construction of molecules. To date, the most popular reaction that has been adapted to fulﬁl these criteria is the 1,3-dipolarcycloaddition, also known as Huisgen cycloaddition, between an azide and a terminal alkyne affording the 1,2,3-triazoleamoiety. This reaction was discovered at the beginning of the 20th century, but the potential of this reaction and its mechanism were only unveiled in the 1960s by Huisgen et al. The potential of this reaction is very high, since alkyne and azide components can be incorporated into a wide range of substituents. In 2002, two groups independently reported that copper(I) salts were able to accelerate this reaction by up to 10 million times. More importantly, at room temperature or with only moderate heating, the copper catalyst directs the formation of only one of the two regioisomers, namely the 1,4-regioisomer (Fig. 2). 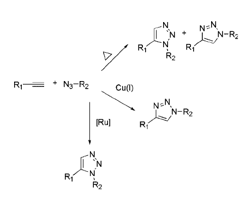 Fig.2 The 1,3-dipolar cycloaddition between azides and alkynes.(cited from Medicinal Research Reviews)

Recently, this polymerization method started to attract renewed interest due to the emergence of click chemistry. Thus, poly(triazole)s, Diels–Alder polymers, sulfur-containing polymers, and ﬂuoropolymers have been synthesized by the so-called click polymerization. Michinobu group has, in the past few years, noted high-yielding thermal addition reactions between electron-rich alkynes and strong p-acceptors, such as tetracyanoethylene (TCNE) and 7,7,8,8-tetracyanoquinodimethane (TCNQ), and successfully developed new types of click post-functionalization of semiconducting polymers. This post-functionalization could control the energy levels of semiconducting polymers substituted with electron-rich alkynes by the amount and type of the added π-acceptors. Very recently, Michinobu group also demonstrated that the TCNQ polyester could be quantitatively functionalized by the electron-rich alkynes, resulting in the highly colored charge-transfer (CT) chromophores.