The formula of Acridine is C13H9N with a flat aromatic, hydrophobic nitrogen-contained heterocycle (Fig.1). It is structurally similar with anthracene with one of the central CH groups replaced by nitrogen. The substituted derivatives of the parent ring are called acridines, a mild base like the related molecule pyridine and quinoline.

Fig. 1 The Skeletal formula with numbers and Space-filling model of Acridines (cited from Wikipedia)

Acridine derivatives have a long history, beginning with antimicrobial activity that was reported by Ehrlich and Benda in 1912, and exhibit several drug properties, such as antiprion, anticancer, antibiotic, antinociceptive, anti-AchE, antileukemia, antimalarial, anticiceptive, antipsychotic, antidepressant, antidimentia, and telomerase inhibition. Their hydrophobicity privileges them high penetrability into the cell membrane and strong coordination with DNA and RNA; which giving them their drug properties. The highly extended π electrons system causes fluorescence that can be used to study biologic processes like cell cycle determination, stain nucleic acids, and flow cytometry.

Acridines are interesting heterocyclic structures due to their broad biological properties since they are used as antitumour, antiparasite and antibacterial agents. They have been known since the 19th century and it was only after World War I that their potential in the fight against cancer was first noticed. The trypanocidal activity of 10-methyl-3,6-diaminoacridinium chloride (Trypaflavin, acriflavine; Fig.2) was reported in 1912 by Ehrlich and Benda, and the antibacterial activity of the same compound and the neutral (non-methylated) acridine proflavine in the following year by Carl Browning, a major figure in the development of acridine-based chemotherapy. The planarity of these aromatic structures could intercalate within the double-stranded DNA structure, which leads to anticancer activity. 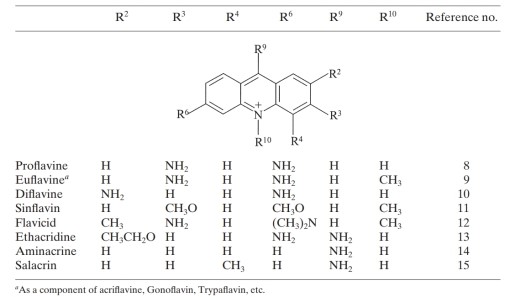 As a result of their fluorescent properties, acridines have been widely applied as sensors for metal ions, anions, and for organic and inorganic substrates. The monosubstituted acridine 9-acrylamidoacridine displayed a selective fluorescence enhancement on titration with Hg2+. The novel fluorescent probe was rationally designed and synthesized. The fluorescent probe exhibited good selectivity and sensitivity toward Cr3+ in methanol, and the probe-Cr3+ mixed solution also displayed excellent selectivity to PO43-. Two novel biotinylated fluorophores (2- biotinyloxyethyl) acridine-9-carboxylate and (2-biotinylamidoethyl) acridine-9-carboxamide were synthesized as fluorescent materials and labels in bioanalytical applications. Highly sensitive solid-phase fluorescence-based immunoassays that may find applications in proteomics are biotinylated acridinium derivatives such as the 9-(2-biotinyl-oxyethyl)- carboxylate-10-methyl-acridinium triflates.

The crown ethers composed of acridines derivatives can be well function-directed designed for photo-responding or ion-sensing materials. Enantiopure dioctyl-substituted acridino-18-crown-6 ether-type ligands are potentiometric sensor molecules when incorporated into plasticized PVC membrane electrodes. The cationic cyclophane derivate with bridging and spacer groups can undergo diverse intermolecular interactions due to a semirigid cavity.