Most of organic building blocks are commercial available which tend to be structurally similar. Their limited variations in appendages and functionally-selective handles privilege the building block high assembly and manipuility.

The chemists use the 'build–couple–pair' strategy of organic synthesis, which entails preparing molecular building blocks that contain several chemical groups. Some of these groups react in the first step of the synthesis to couple the building blocks together. Once all the different blocks have been coupled, the remaining groups react with others found in the same intermediate molecule. The build–couple–pair strategy precisely mimics that used by nature in the biosynthesis of nearly all natural products, where it also allows structurally diverse products to be formed.

Apart from the substrates for total synthesis, organic building block also play a key role in methodology studies, especially the transition-metal catalysis. It’s well acknowledged that plenty of building blocks contain one or more heteroatoms which are able to coordinate with the metal to promote or catalyze a series of unprecedented reactions. Moreover, they are also promising to be efficient small organic catalysts.

Gilbertson group reported the synthesis of a series of NHC building blocks that can then be incorporated into more complicated structures by palladium catalysis. This approach is used for the synthesis of three amino acids containing NHC side chains. They also illustrated that the amino acids can be used in solid-phase peptide synthesis to make NHC-containing peptides. Additionally, the NHC side chain can be deprotected and coordinated to a catalytically active transition metal. Finally, they show that the building blocks participate in Suzuki coupling to provide access to substituted NHC ligands (Fig.1).

In most case, building blocks will be modified or functionalized to more complicate and powerful ligands with versatile binding patterns. Developing privileged ligands for stereoselective catalysis is of considerable interest. A unified approach to making all privileged ligands from a single building block would be highly challenging. Chin group previously showed that limitless varieties of chiral diamines can be easily prepared from the “mother diamine” by diaza-Cope rearrangement. More surprisingly, the mother diamine is not only useful for making “daughter diamines”, but also for making binol, binap, and monophos analogs[2]. While many innovative chiral catalysts have been developed based on diamine, binol, binap, and monophos ligands (Fig.2), in this case, a single compound can be easily transformed into a wide variety of chiral ligands including analogs of dpen, binol, binap and monophos. 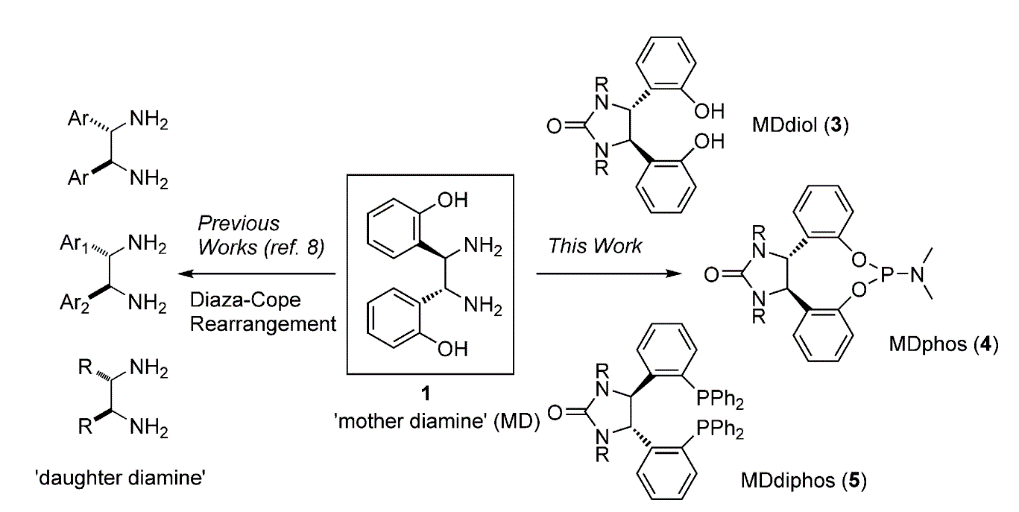